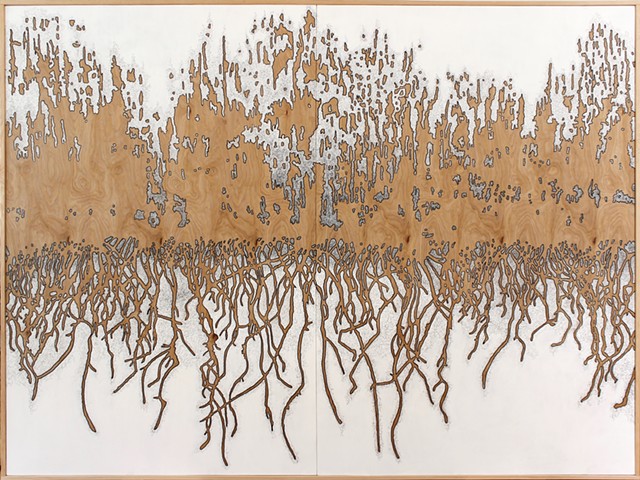 This series of works started out as a singular drawing completed in 2005 in response to the Clark Fire that burned an area of about 5000 acres along and around Fall Creek two years prior. The forest surrounding the swimming hole that I love the most along this stretch of old-growth cloaked green water was reduced to ash and snags. This was the swimming hole where my kids, then toddlers, played endlessly in the shallows and I found a place to swim against the steady current and center myself during graduate school. We spent many days there, and also a few nights. It was one of the places I fell in love with and kept me in Oregon.

I made a few more of these drawings in 2005, some ink on translucent duralar, some ink on paper. Some were kept, others not. In 2010 I created a large-scale version of this drawing. It was done as an 80-foot long wall drawing, and despite the scale, was temporary, only lasting a number of weeks. The work was painted over at the end of the exhibition. All that is left are images and memory.

In 2017 I watched the Milli Fire spread towards Sisters, Oregon on the days surrounding the solar eclipse. Later that summer the Columbia Gorge burned. Many people I know where affected by the scorching of these landscapes including myself. Places that were dear to people were forever changed, instantaneously unfamiliar. I decided to revisit this image in December of 2017 through the summer of 2018 and created a series of works that are specific references to 2017 while simultaneously echoing that first drawing made in 2005.

The burn series was instigated and informed by landscapes that have been radically altered by fire, but more broadly, these works are about fragility, loss, memory, and gradual regrowth. The things the landscape can teach us about ourselves. The things that don’t go away.